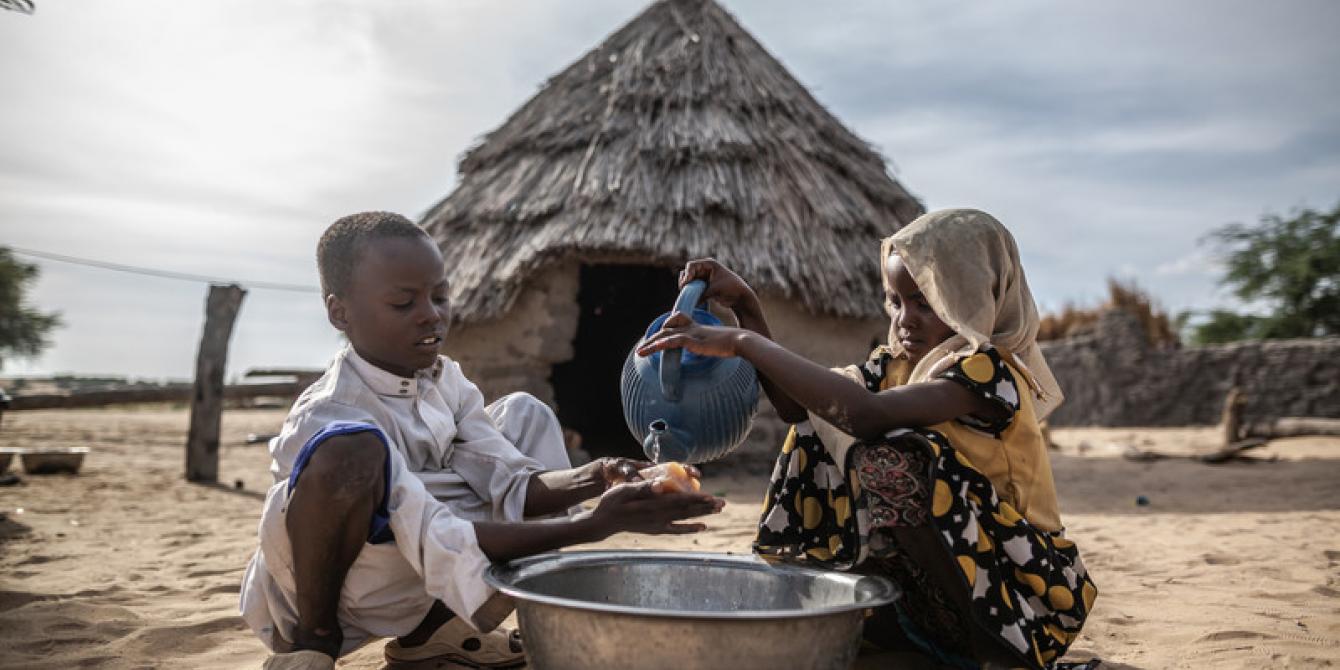 Mahamat and Sara wash their hands following the rehabilitation of two water wells, the installation of a cistern and hygiene awareness sessions by Oxfam in their community of Kamkalaga in Chad. Credit: Pablo Tosco / Oxfam

Despite having an abundance of natural resources, including oil, Chad remains in one of the lowest positions (186 out of 189) in the 2018 ranking of countries according to the Human Development Index (HDI) established by the United Nations Development Programme (UNDP). Approximately 87% of Chad’s rural population (estimated at 14 million people) lives on less than a dollar a day.

This contradiction between the presence of abundant natural resources and the persistence of high poverty levels among the population explains the determination of Chadian civil society to demand and obtain a more equitable distribution of public resources, particularly the revenue generated by the extractive industries.

Although the Chadian economy depends heavily on agriculture and livestock farming, the country is unable to ensure the food security of its whole population and provide decent incomes for family farmers, who constitute the majority of the working population. 75% of the population is rural, and 87% of the rural population is poor.

Moreover, Chad is one of the countries in the Sahelian region where the security context is fragile due to conflicts not only in neighbouring countries but also within its borders. This volatile situation poses a series of threats to the lives, security and livelihoods of the population, particularly in the Lake Chad region, and in the East and South of the country, thus worsening the humanitarian situation in those areas. Since 2003, the country has taken in a large number of displaced persons, including more than 451,000 refugees from Sudan, the Central African Republic and Nigeria.

Oxfam has been working in Chad since 1966, collaborating with civil society, the government, and communities to reduce inequalities. Its vision of change for the country is: “A Chad without hunger or poverty, where men and women have the same opportunities to access and control resources, where the most vulnerable are protected from all forms of violence, enjoy full and fair participation in decision-making bodies, and build their livelihoods with a view to achieving harmonious and sustainable development”.

We provide assistance and protection adapted to vulnerable women, men, and children affected by crises (population movements, epidemics, flooding, food and nutrition crises), ensuring respect for their rights, while preparing them to better withstand future shocks. Our crisis alert, preparation and response system enables us to effectively assist the affected populations and maintain their dignity.

Oxfam also advocates for the mobilization of donors and the government in order to give special attention and provide an effective response to crises, particularly in the Lake Chad region and the South of the country, which have been the scenes of recent crises.

We are developing dynamic and competitive agro-sylvo-pastoral sectors that receive financial and technical support from the private sector and the State. Oxfam promotes the occupations of rural women to improve recognition of the role they play in farming. We give them access to means of production and foster their financial autonomy.

We help citizens participate in national and local budgetary processes with a view to promoting transparent governance and reducing inequalities, with a particular focus on gender equality.

In addition, we strive to strengthen transparency and accountability in the management of the extractive industries, in accordance with national and international commitments.

To that end, Oxfam has positioned itself as a partner of direct dialogue and influence with the State, civil society, and the private sector, with a view to contributing to the creation of conditions of inclusive governance and the fulfillment of commitments in the management of public resources.

Building a network of influence to reduce inequalities

Our actions are supported by influencing work based on strategic partnerships with a diverse range of civil society, private sector and State partners. This has translated into various campaigns (#MonLaitEsLocal and #AvecLesFemmesRurales) that aim to reduce the inequalities faced by women and girls in Chad through the development, promotion and protection of their role in the dairy sector and in securing their land rights, as well as through innovations based on the lessons learned from our programs, which are scaled up to amplify the impact of our actions.