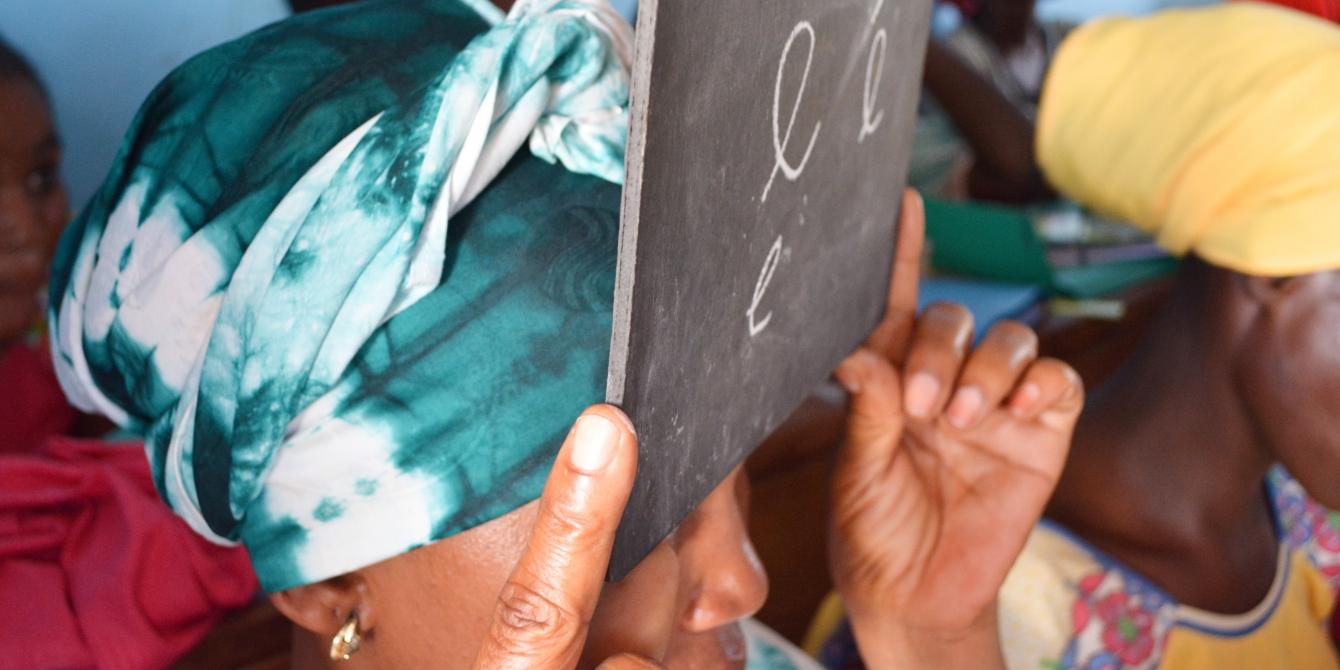 Survivors of gender-based and other types of violence learn how to write the letter “e” during a literacy lesson at the Women’s Home in Bria, in the heart of the Central African Republic.
Photo: Aurélie Godet / Oxfam

Follow our updates on our response to the COVID-19 by country.

Visit our website Oxfam in Central African Republic (in French)

The Central African Republic is facing an unprecedented humanitarian crisis. This landlocked country of Central Africa, one of the poorest in the world, has a population of 4.6 million people and descended into violence in 2013, after President François Bozizé was overthrown by the Seleka Rebellion.

Today, the State only controls a small part of the national territory, while in the provinces armed groups fight each other for control of resources, particularly diamonds, gold and livestock. On 6 February 2019, the Political Agreement for Peace and Reconciliation in the Central African Republic was signed in Khartoum between 14 armed groups and the Government of the CAR. It is the eighth agreement to have been concluded since 2013.

We have been working in CAR since January 2014 to provide emergency response and help the victims of the conflict get back on their feet. In addition, we are supporting civil society organizations in their development and we have a strong advocacy component to give a voice to the most vulnerable segments of the population in the defence of their rights.

In Bangui, Batangafo, Bria, and Paoua, almost 250 people are working every day to address the urgent needs of the population and promote the development of civil society.

Our operations are among the largest of the humanitarian and good governance actors in CAR, as well as within Oxfam in Africa.

We help by producing and bringing drinking water to the displacement sites and neighbourhoods, as well as by rehabilitating and maintaining the sanitation infrastructure. We also organize hygiene promotion actions.

A flagship project in 2019 was the Bria gravity water network. This new water distribution system has made it possible to provide an almost constant supply of drinking water to the 50,000 displaced persons living at the PK3 displacement site.

To feed the population and support small local businesses, we distribute foodstuffs and undertake projects of public interest, such as building roads or markets.

The local communities receive training, seeds and equipment, which enables them to feed their families.

Improving the protection of the population

We work from the assumption that the foundations of lasting peace are laid at the community level, particularly in a country where the State institutions are weak, as is the case in CAR.

We support Community Protection Committees with raising people’s awareness about their rights and directing victims of sexual and physical violence to appropriate medical or psychological services.

To establish peace and sustainable development, we want to give civil society organizations the means of developing and participating in the implementation of national policies. Even in a country where the state institutions are weak, like CAR, they are sometimes the only ones that are able to provide basic social services to vulnerable communities.

With that in mind, in 2019 we opened Civil Society House, which serves as both a resource centre and a workspace for its member organizations.

Promoting the rights of women in conflict situations

We are helping women from civil society to set up an advocacy campaign on women's rights in a context of conflict.

The aim is to encourage women to assert their right to equal participation in the process of building peace, promoting security and increase their participation in decisions affecting political, public, and private life.

Women are most affected by conflicts and are a cornerstone of lasting peace.