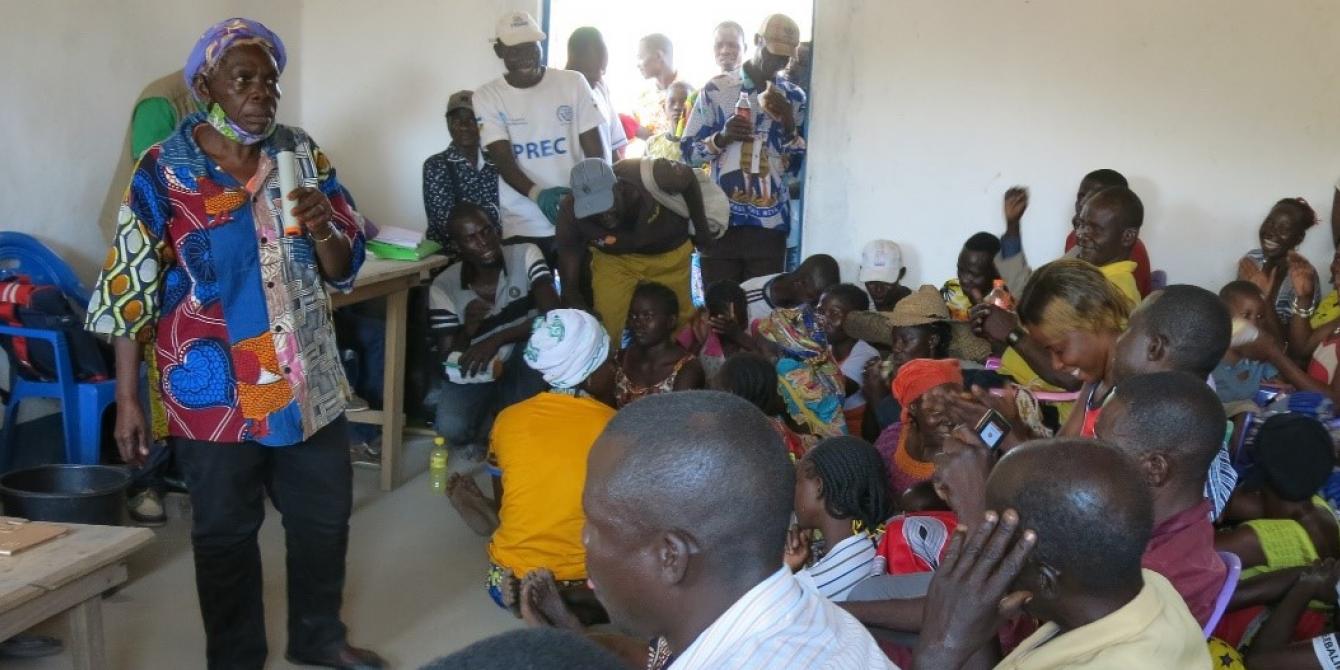 Our Partner’s Corner : Insecurity and hunger, a double threat looming over Paoua

Let's take a trip to Paoua, located in the north-western part of the Central African Republic (CAR), which is known as the grain and vegetable region of the country. For several years, the people have been affected by the ongoing insecurity. For this vulnerable population, each day is a struggle to survive in the face of growing insecurity and hunger.

Noudjougoto Marie (NM) is the Chairperson of FARDEP, the Federation of Rural Actors for the Economic Development of Paoua, an organization working for the empowerment of producers in the 8 municipalities of the Paoua district. She describes her organization and how it contributes to the fight against hunger.

Question : In Paoua, 48.82% of the households - 30,011 people - are facing hunger. What are the reasons for this situation?
NM: Hunger is a critical issue in Paoua. The increase in the number of displaced people due to attacks by armed groups in certain areas has made households more vulnerable. Every day, the population of Paoua grows with the arrival of internally displaced people. The never-ending security crisis is forcing people to abandon their villages to come to Paoua and its surroundings and survive in dire conditions of poverty. Some of them do not even have shelter or food. The already vulnerable host community is not able to cover their basic food needs.
The ongoing conflict in this area also makes it impossible for farmers to harvest their crops or risk losing them due to forced displacement or looting.  Also, the effects of climate change have disrupted the agricultural season.
The use of landmines (explosive devices) on the roads also discourages people from going out to farm. All these different factors have left the population dependent on aid and have forced them into a food crisis unlike any other.

Question : What steps are FARDEP taking to address the hunger problem in this region of the country?
NM: With Oxfam's support, we have conducted several activities. We have received help in the form of seeds, agricultural materials and training, but also through the construction of warehouses to store and sell our products. This allows us to help farmers produce sufficient and sustainable amounts of food.
We have also been able to carry out income-generating activities (IGA), especially when it comes to education, with the construction of a learning center where participants can learn to read, write and do math.
We have also received cash and food during the lean season to help the most vulnerable households.

Question : What else can and should be done to prevent more vulnerable people from experiencing worse levels of hunger?
NM: It is important to continue the distribution of food to vulnerable families, especially during this period of harvesting.

Income-generating activities for women significantly ease the burden on families, which is why it is very important that they continue because this makes it possible to empower women and create a more balanced household.  So, we must encourage these women to expand their activities.
The lack of support from the government also forces us to work with the little means we have and a very small budget. In order to overcome the food crisis, we need support from the government and from humanitarian agencies and other stakeholders.
Finally, it is important to work with national organizations to bring back peace, which will contribute to the economic development of this region.

Question : How could the closure of the Oxfam facility in Paoua impact or worsen the hunger issue ?
NM : Since arriving in Paoua, Oxfam has provided great support to the population, the impact of its intervention is very apparent in the affected villages and we hope that the organization will continue to reach others because the needs are immense. Oxfam is one of the biggest humanitarian actors in Paoua, we can' t think of any other organization that will be able to fill in the gap after Oxfam's possible departure.  FARDEP is active in the 8 communes of Lim Péndé. Of these 8 communes, Oxfam has been able to provide aid to 4 so far. The people of the other communes are approaching us and we tell them ˝we hope that Oxfam will one day reach them˝. But if Oxfam leaves, I think the people will suffer, mostly because of the hunger crisis.

We continue to welcome displaced people on a daily basis. These people need assistance and protection because since the departure of MSF from Paoua, only two organizations, one of which is Oxfam, are working in the field of protection and I can already imagine what will happen to these thousands of women survivors of gender-based violence. There are still many needs to be met and if Oxfam leaves the region prematurely, it will have a negative impact on the population, worsen the hunger situation and increase the risk of violence against women and girls in the community.