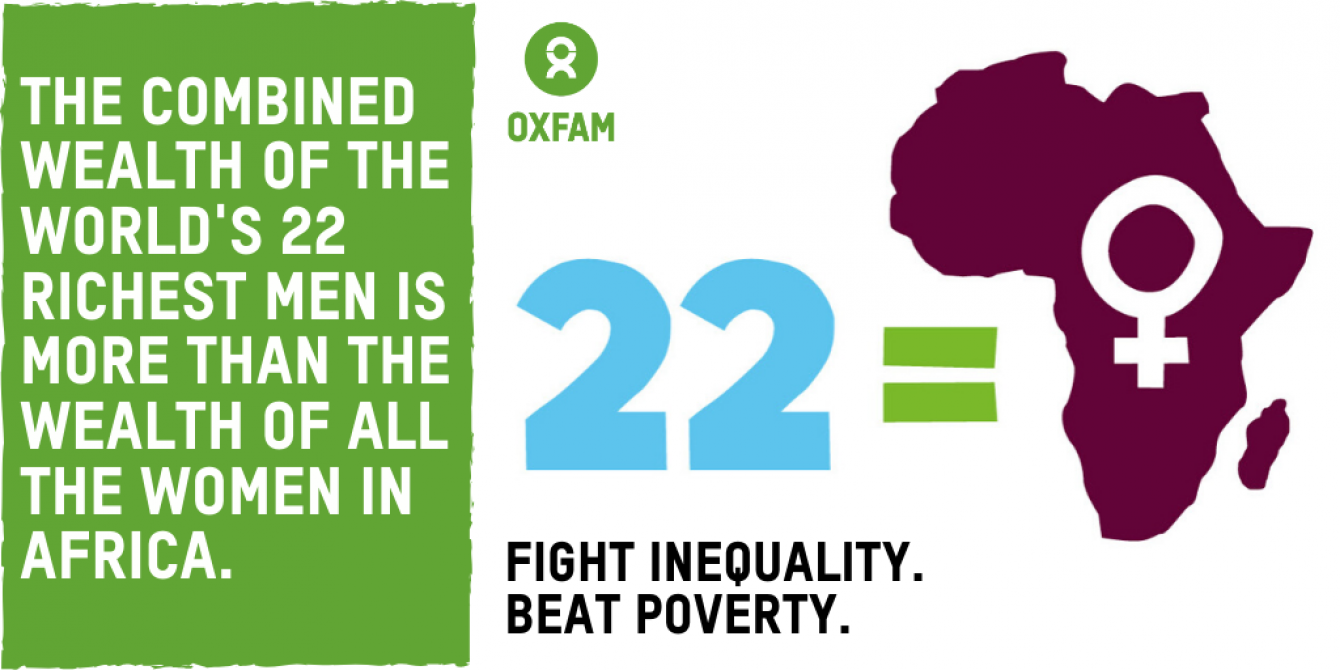 Oxfam in West Africa, Jan. 20, 2020. The world’s 2,153 billionaires have more wealth than the 4.6 billion people who make up 60 percent of the planet’s population, reveals a new global report from Oxfam today ahead of the World Economic Forum (WEF) in Davos, Switzerland.

Global inequality is shockingly entrenched and vast and the number of billionaires has doubled in the last decade. Oxfam India CEO Amitabh Behar, who is in Davos to represent the Oxfam confederation this year said: “The gap between rich and poor can't be resolved without deliberate inequality-busting policies, and too few governments are committed to these.”

This year’s report focuses on unpaid care and underpaid care work and how this is fuelling global inequality. Oxfam’s global report, ‘Time to Care’, shows that the huge economic gap between the rich and the poor is based on a flawed and sexiest economic system that values the wealth of the privileged few, mostly men, more than the billions of hours of the essential work such as caring for the young, old and sick, fetching water and firewood – the unpaid and underpaid care work done mostly by women and girls around the world. The heavy and unequal responsibility of care work perpetuates and exacerbates gender and economic inequalities, the report emphasized.

The 22 richest men in the world have more wealth than all the women in Africa. Africa still one of the most unequal continents, with some of the most extreme divides between rich and poor in the world. As Oxfam in West Africa revealed last year at the launch of the first-ever Commitment to Reducing Inequality Index (CRII) regional report, inequality is at crisis levels in West Africa, yet these governments are the least committed to reducing inequality on the continent.

Echoing the new global report, the regional index revealed that West African governments are exacerbating inequality by underfunding public services, such as healthcare and education but also the agriculture sector while under-taxing corporations and the wealthy, and failing to clamp down on tax evasion, tax avoidance, and corruption.

The West Africa region is also one of the most affected in the world by Climate Change impact which is an inequality amplifier. For example, the Global report reveals that by 2025, 2,4 billion people worldwide could be living in areas without enough water as a result of climate change. Many women and girls will have to walk further to find water.

Spokespeople are available in West Africa for interviews in English, French and Spanish.

Download ‘Time to Care’, a methodology document outlining how Oxfam calculated the statistics in the report and the dataset.

Oxfam’s calculations are based on the most up-to-date and comprehensive data sources available. Figures on the share of wealth come from the Credit Suisse Research Institute’s Global Wealth Databook 2019. Figures on the very richest in society come from Forbes’ 2019 Billionaires List. Billionaire wealth fell in the last year but has since recovered.

Oxfam is part of the Fight Inequality Alliance, a growing global coalition of civil society organizations and activists that will be holding events from 18-25 January in 30 countries, including India, Kenya, Mexico, Pakistan, South Africa, Uganda, and the UK, to promote solutions to inequality and demand that economies work for everyone.