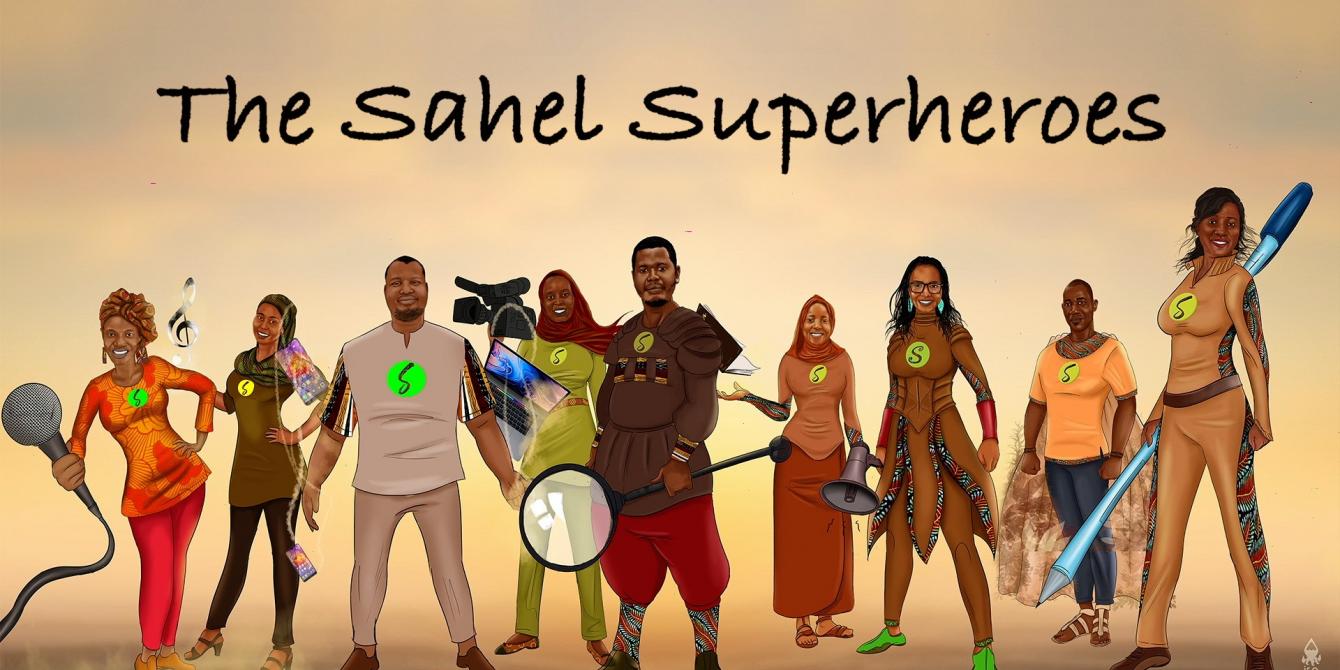 Despite its immense development potential, the Sahel region faces major challenges: extreme poverty and glaring inequalities make the lives of millions of people harder and shorter. For women in particular, discrimination is an obstacle on the path to their emancipation and personal development. Going to school for little girls or going to the doctor for the sick remains an unattainable dream for many.

But the Sahel also has an incalculable wealth: its youth. Whether in Mali, Chad or Burkina Faso, Senegal, Niger or Mauritania, these young people are determined to move the lines. Aware that poverty and inequality are not inevitable but the result of political and economic choices, they mobilize their communities and work for a more just and united Sahel. They are everyday superheroes with very real powers.

Oxfam went to meet them.

Malika: "We are breaking the rules."

Rakizatou Malika, better known as Malika la Slameuse, is a Burkinabe artist and entrepreneur. She uses her talent to help marginalized people. Inspired by Malian artist Salif Keita and the work he does with albinos, her foundation works to change their status in Burkina Faso.

"There are so many albinos who don't go far in school because of discrimination, they can't do catering because people won't eat, people are afraid of albinos. They can't do sewing because all albinos, without exception, have eyesight problems so they are just stuck there. Here the fight is really to change the way people look at them."

Issaka is a Burkinabe volunteer who travels to different regions of the country to fight against cultural, social and environmental inequalities. Involved in his community and federating young people, Issaka and his group of volunteers take part in different campaigns with the aim of improving the living conditions of Burkinabes.

During the last presidential elections, they pressured the different political parties to make the reduction of inequalities a central part of their programs. " While the political parties were campaigning, we were also campaigning to appeal to the people. To tell them we really need to vote for equality."

Cynthia: "When you know your rights, you are free."

Cynthia is a young committed lawyer who fights for the rights of youth and women in Burkina Faso. After graduating in communication and journalism, Cynthia continued her studies in law. This is where she got the idea to create, in 2019, the website DroitInfo.bf which brings legal information to everyone.

"Illiteracy is at a very high level in our countries and so we try to address anything that is related to law, so that any citizen, of a certain academic level, can understand what is said in our various articles on the site."

Mariam: "I want to convince women that they have the right to claim their rights. "

Mariam is a young Malian activist. Journalist, poet and writer, she fights for the rights of women. She particularly fights against early marriage and unwanted pregnancies so that young women can continue their studies. A graduate in law, she founded the young association “For the Cause of Women” with which she carries out awareness-raising actions with students.

“Women are people in their own right. Man sees them as competitors, but they have the same rights as boys, even though they often don't know. There is also the weight of tradition. Traditionally, women are women only when they are in a home. I want to convince them that they have the right to claim their rights. "

Fousseyni: "We help the most vulnerable to organize to face the State"

Fousseyni is a young Malian activist, member of the Coalition of African Alternatives Debt and Development Mali (CAD). A sociologist by training, he fights against human rights violations and the expropriation of land by private investors and state enterprises. Its main challenge is to inform and train, so that the most vulnerable can defend themselves. He teaches them the tools offered by the laws, which are often overlooked by victims. It also supports the creation of networks of associations to create a local force.

"I have seen peasants lose land that they have farmed for 50 years because the state ceded it to a multinational. A farmer who loses his land becomes very vulnerable; he has to work with the rest of his family for other farmers as a laborer. Children no longer go to school. I have seen families suffer. It brought tears to my eyes. "

Kadiatou: "Educating a girl is educating the whole community! "

Kadiatou is a young student and activist from Niger. She fights for the rights of women and fights against the traditions which limit their emancipation. According to her, education is the key against the violence plaguing the country. For this reason, she carries out awareness-raising actions in the rural areas of the Dosso region. She is also involved in raising awareness of family planning - a taboo in Niger -, using in a particular participatory theater.

"As a child, I saw women suffering in silence, I did not accept to be silent. My family saw me as a rebel. It was very hard, especially with my parents. I was ready for all the sacrifices, by dint of perseverance, tired, they ended up accepting. Now they are proud of me. "

Younoussi: "As long as the political decision-makers do not change anything, we will continue our struggle"

Younoussi is a young Nigerian activist, committed to defending the rights of populations in the face of mining. He is a project manager within the Network of organizations for transparency and budget analysis in Niger (ROTAB), which is mobilizing to change the mining law and forms “citizen watch committees” which act on the ground to put pressure on the authorities.

"When the committees find breaches on the part of companies with regard to safety, land or environmental regulations, they sound the alarm. There is also a real environmental problem. These farms degrade cultivable fields and poison livestock. As long as the political decision-makers do not change anything, we will continue our struggle. The new generations have undeniable awareness. "

Salim is a young Chadian activist who fights for digital access for all. Computer scientist, he is the co-founder of WenakLabs, a youth association that promotes active citizenship and participatory democracy through technological innovation and the opening up of public data.

In partnership with Oxfam, Wenaklabs has developed the Femmometer citizen digital platform, which measures political commitments in favor of gender equality. Salim’s fight is to allow as many people as possible to benefit from the opportunities that the internet represents.

"We want to show the government that the internet is not a threat but is a benefit for the development of the country. We have an educational approach, we want the State to participate in innovations, that it does not lag behinds. Development is not measured by the number of skyscrapers, but by the number of citizens who can access health, education, and employment. "

Yasmine: "I want to be an example, I want women to have their place in society"

Yasmine, a young Chadian activist, is a singer and director. She uses art to raise awareness among rural populations. During a concert tour in Chad in 2013, she discovers the sad reality of girls victims of obstetric fistulas, a situation affecting many women in rural Africa which causes urinary or fecal incontinence following a difficult childbirth. "It's terrible, the parents don't want or can't get them to be treated," she said. So she created a nomadic cinema, a way she found to educate people in rural areas.

"I do cinema, forum theater and concerts on different subjects: fistulas, early marriage, schooling for girls, female circumcision, conflicts between farmers and herders. I want the Chadians to be like the others. I want women to have a place in society. "

The crises facing the Sahel, whether security, humanitarian or environmental, are rooted in the deep inequalities that are encompassing an increasing part of the population in poverty.

The multiplication of citizen movements, in which the Sahelian youth are massively involved, are powerful testimonies of the desires of the populations to obtain more justice, transparency and accountability.

These inequalities are not inevitable. Join the movement so that together we can fight them and end poverty for good.