The African Climate Caravan will make its voice heard at the Climate Change Summit (Dakar) and the Pre-COP (Kinshasa).

More than a hundred African civil society organizations are currently traveling across 28 countries on the continent to Egypt to present their Joint Declaration calling for more climate justice, a few weeks before the COP 27 in Sharm-el-Sheikh.

Together, the 28 participating countries expect their Heads of State and Government to defend the interests of their own populations, in particular by supporting the agro-ecological transition and protecting the rights of farming communities by preserving natural environments and by demanding greater accountability from emitting countries to finance adaptation measures on the continent. The proces, they emphasize, must promote better representation of youth and women in decision-making bodies.

They also call on the rich countries to live up to its climate commitments from the Paris Agreement - including mobilizing $100 billion a year for climate action in developing countries through 2025 (a target that was missed by $16.7 billion in 2020) - and to take its fair share of this climate crisis that particularly affects the African continent.

This movement of unison reflects the magnitude of the climate crisis in Africa. The continent is facing an unprecedented hunger crisis in the Horn of Africa and West Africa - 66 million people are facing hunger in part because of droughts that are becoming more frequent and severe as rainfall becomes more erratic and unpredictable.

As a report released last week by Oxfam reminded us, rich countries' aid to West Africa to cope with climate change is insufficient and is dangerously increasing debt levels.
The African Climate Caravan will continue its journey in the next few days in Senegal and in the Democratic Republic of Congo during the Climate Change Summit and the Pre-COP, under the name of its continental campaign, "Drum beating towards COP 27".

"Until recently, the hushed corridors of discussion forums such as the COP excluded from their perspectives those who were most affected by the climate emergency, yet least responsible. Now we want our stories to be heard, but also our aspirations and ideas. And governments around the world have a duty to listen to us and to act," explains Séna Alouka, director of the Young Volunteers for the Environment (YVE) Togo and coordinator of the Caravan along with other partners.

After having organized numerous awareness-raising and rallying activities in their respective countries, the caravaneers will publicly unveil, on Tuesday, October 4 at 12:00 p.m. UTC during an online press conference, their Joint Declaration which they will hand over to the
many political decision-makers they meet along the way.

"The National Caravans are also an opportunity to mobilize local populations and remind them that changes in their local environment have global causes. Because we know that all of Africa - through its communities, countries, and ecosystems - is paying the price of global inaction when it has contributed the least to climate change," said Azara Remalia Sanogo, Oxfam in West Africa's food and climate justice advisor.

Through testimonies, field actions, debates, but also its influence work, the African Climate Caravan intends to increase the pressure on national governments and during international negotiations. It hopes to contribute to a stronger, more dynamic and more sustainable climate justice movement on a global scale.

Spokespersons are available in French and English and are spread throughout the participating countries.

Audio, photo and video content can be provided upon request, as well as the Joint Declaration. 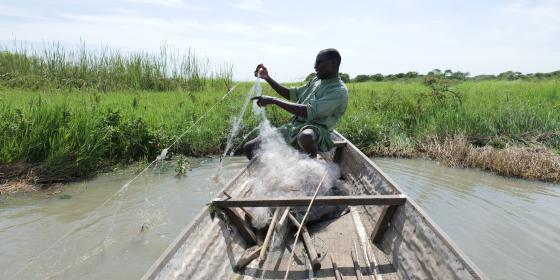 In West Africa, and particularly the Sahel, countries that have contributed least to the climate crisis are among those in the world that are most vulnerable to climate change impacts. Millions of West Africans suffer the worst consequences of the climate crisis; in recent years, climate impacts...

Oxfam in West Africa launched its Climate Justice Strategy in 2020, to help strengthen the resilience of states and communities against climate change and move towards low carbon economies. This strategy is articulated around three objectives that focus our work on addressing the rights of women,...