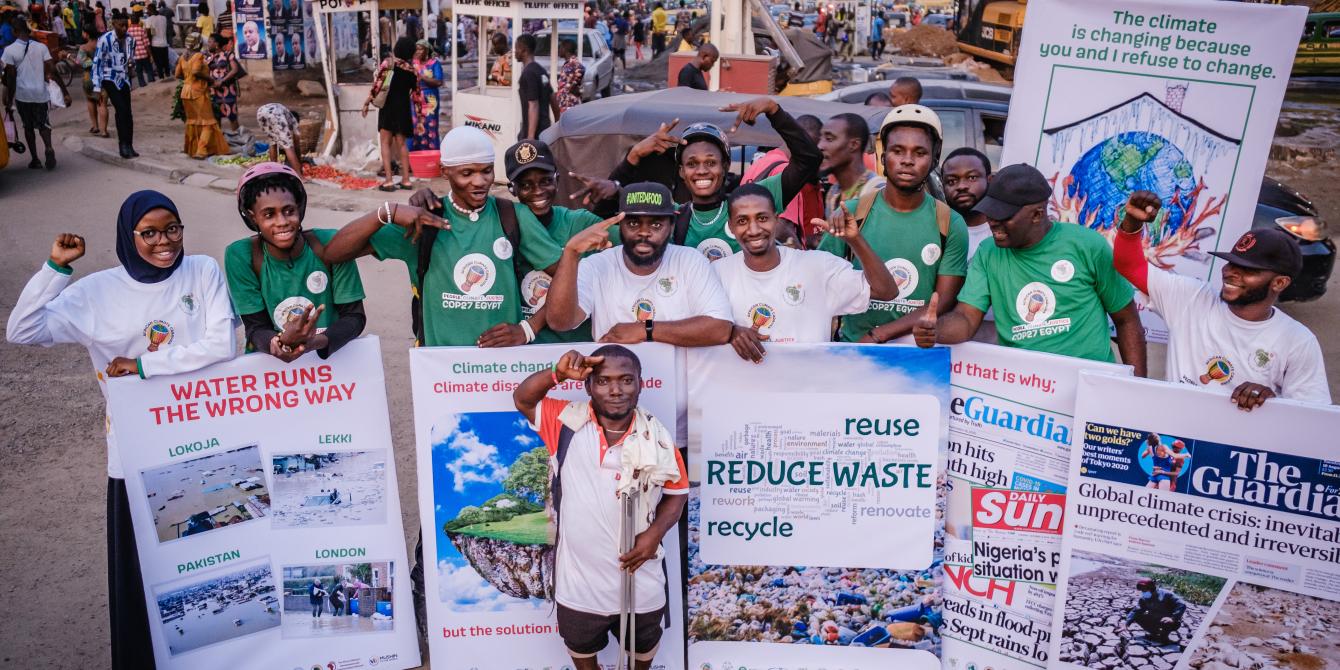 The African Caravan draws a mixed assessment of the COP27 due to the lack of concrete results, while being pleased to have been able to bring its testimony and express united demands until Sharm-El-Sheikh, in Egypt. The Caravan is now preparing to follow up on its movement.

The Caravan, initiated by more than 170 African civil society organizations to demand climate justice, first traveled to 28 countries on the continent to carry out hundreds of activities, before reaching COP27 in Egypt.

A delegation was on site to represent the interests of local communities, both by questioning all the actors present on the reality of climate change on the African continent, and by demonstrating by example that the populations do not remain idle in the face of impacts that affect them.

After two weeks of intense mobilization on site, the African Climate Caravan makes a half-hearted assessment of the COP 27.

First of all, it deplores the meager and disappointing political results.

Indeed, the Caravan expected concrete measures that respond to the aspirations of the people:

"The COPs are held on the basis of the United Nations Framework Convention on Climate Change to which the participating States have adhered. And the Paris Agreement commits the signatory states. It is therefore a question of responsibility, not charity or begging," said Azara Remalia Sanogo, Regional Advisor on Food and Climate Justice for Oxfam in West Africa.

At the same time, the African Climate Caravan is pleased to have taken part in the events led by the civil society present in Egypt, to have brought its main messages to institutions and officials, and finally to have shown its firmness against the main polluting States.

“We know the solutions”, insists Sena Alouka, founder of the Young Volunteers for the Environment. “They are intrinsically linked to local knowledge and ancestral knowledge that solve a large part of the problems: agro-ecology allows us to restore the balance between the earth, animals and people, the alliance of science and peasant knowledge allows us to predict the weather and thus to better adapt. However, the majority of funding is directed towards research in the world of fossil fuels or intensive agriculture, and very little towards solutions proposed by citizens. This is a real problem.”

This is why, with this first participation in a COP, the African Climate Caravan wants to maintain the pressure on decision makers.

Involve the traditional chieftainships and envision what will happen next

“For the dynamics it helped create, the Caravan was worth it," says Massa Kone, spokesperson for the Global Convergence of Struggles for Land and Water in West Africa (CGLTE OA). “We have learned as much about the problems faced by everyone in the face of extreme climatic events as we have about the solutions and good practices implemented by everyone to adapt or anticipate.”

Indeed, without communities, no structural change can be initiated.
And this is precisely what the Caravan hammered home in Sharm-El-Sheikh. “By inviting activists, farmers, traditional chiefs, advocacy officers, the Caravan demonstrated the importance and richness of the word of the communities," explained Dada Zéhé Mêtokan, King of Agonlin (Benin) and caravaneer. “And the traditional chieftaincies are an essential link to ensure representation. While they are increasingly constitutionalized in our States, they were never stakeholders in the climate negotiations. We have asked for this to change."

To continue to maintain the links created by this mobilization movement and to move political lines, the African Climate Caravan will soon review its methodology of action.

"Today, we realize that the Caravan has the means to be more visible and therefore more impactful outside of the COP. By going closer to the communities and consolidating our advocacy with that of other organizations - including outside the borders of Africa - we feel that we will be more audible by the international community," shares Oumou Aminata Drame, a senior technician in agro-ecology in Senegal and member of the CGLTE.

A new model on which the African Climate Caravan will work from next month in Abuja.

Since the end of September, more than a hundred African civil society organizations have been traveling across 28 countries on the continent to Egypt to present their Joint Declaration calling for more climate justice, a few weeks before the COP 27 in Sharm-el-Sheikh. Together, the 28 participating...

Oxfam in West Africa launched its Climate Justice Strategy in 2020, to help strengthen the resilience of states and communities against climate change and move towards low carbon economies. This strategy is articulated around three objectives that focus our work on addressing the rights of women,...