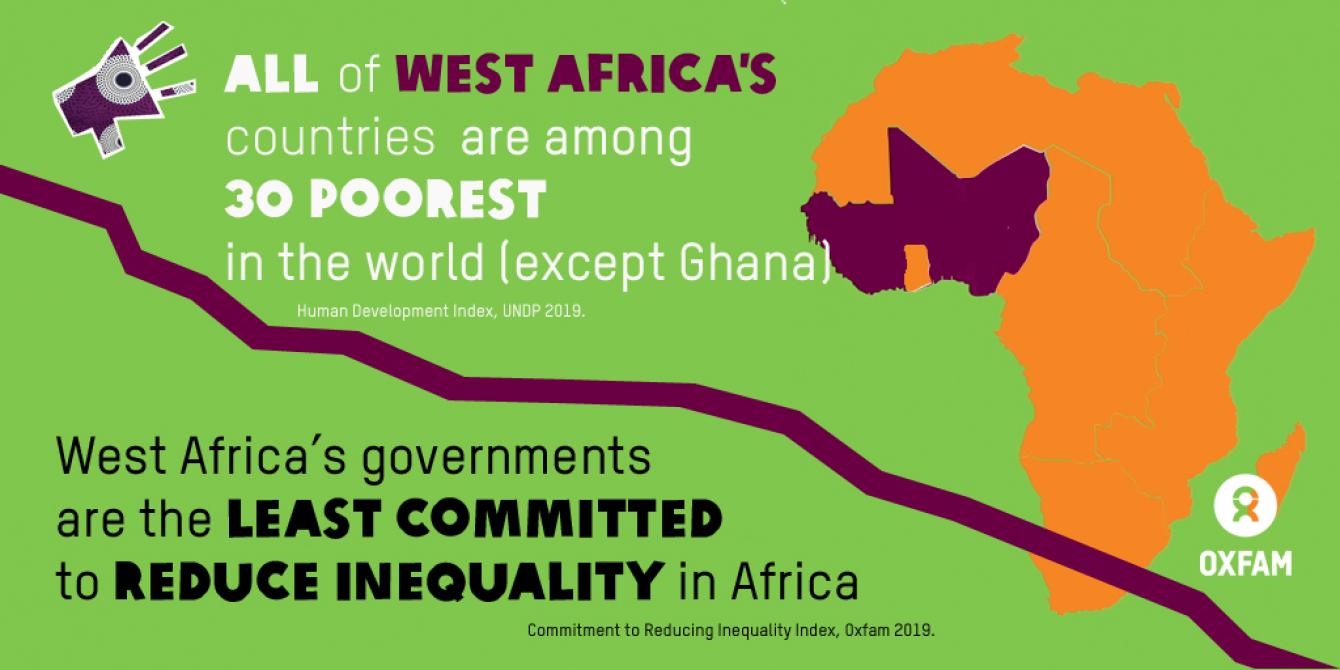 December 9, 2019 – All West African countries, with exception of Ghana, are among the 30 poorest countries in the world, according to the latest Human Development Report (HDR) which this year focuses on inequality.

Four of these countries are among the bottom ten – Burkina Faso, Mali, Niger and Sierra Leone. Governments in the ECOWAS region are also the least committed to fighting inequality in Africa, based on the Commitment to Reducing Inequality (CRI) index, published in July 2019 as part of the regional report The West Africa Inequality Crisis by Oxfam and Development Finance International (DFI).

“The HDR 2019 findings further confirm that West African governments are fuelling inequality by underfunding public services, such as healthcare and education and failing to clamp down on tax evasion, tax avoidance and political capture. This is unacceptable,” said Adama Coulibaly, Regional Director of Oxfam in West Africa.

Just as the regional report of Oxfam/DFI, the 2019 HDR also underscores that power imbalances are at the centre of many inequalities. To comprehensively fight inequality, the HDR challenges governments to pursue policies that tackle the underlying drivers of inequality.

“There is nothing inevitable about the inequality crisis in the West Africa region, and without radically increasing the commitment to reduce inequality, the crisis is likely to only worsen, says Kwesi Obeng, Oxfam’s Programme Advisor Inequality in West Africa. “As an example, revenues from sovereign resources exploited by the extractive industries and a fair and optimal taxation system are critical to putting an end to extreme inequalities in the region,” he added.

As the poorest continent, Africa is also one of the most unequal, with some of the most extreme divides between rich and poor, between men and women in the world. But crucially, this is reversible: “It’s time for West African governments to act decisively. To strengthen this commitment, West African governments must promote progressive taxation, boost social spending, strengthen labour market protection, invest in agriculture and strengthen land rights for smallholder farmers. We cannot beat poverty without fighting inequality.” said Coulibaly, Regional Director of Oxfam in West Africa.

According to Oxfam/DFI Commitment to Reducing Inequality index:

The report, methodology document explaining how Oxfam calculated the figures, and the data set are available on request.