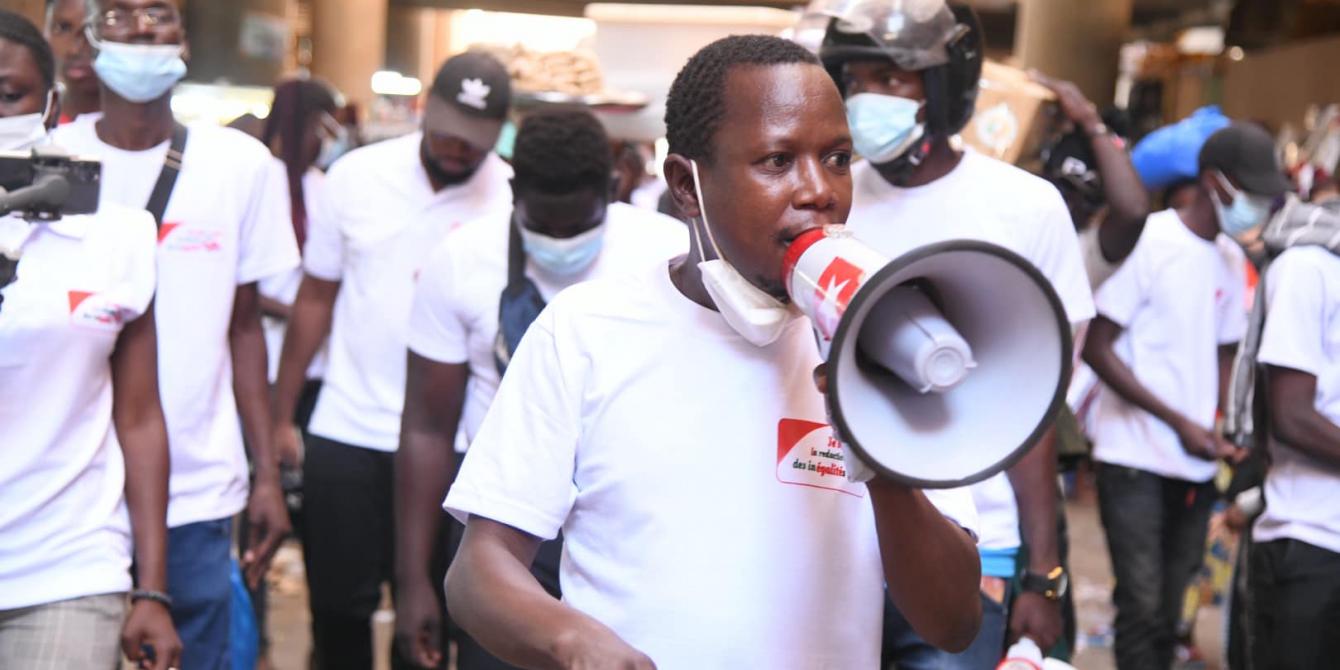 In Burkina Faso, Activists Fighting Inequality Receive a Letter from the President that Can Change Everything

In Burkina Faso, NGOs and activists have been fighting behind the scenes for years to reduce the glaring inequalities in the country, where 20% of the wealthiest people concentrate 44% of the revenues. And at last, their work seems to be paying off. On May 27, the Permanent Secretary of NGOs (SPONG) received a letter from the President of the Republic soliciting their support in the formulation and implementation of a job creation program for young people and women. For Alassane Bougma, project and advocacy officer at SPONG, this demonstrates "a willingness to take inequalities into account in the various future actions of the Burkinabe government.

But how did SPONG and its members get to this point?

It all started during the last presidential elections in November 2020. As the world was shaken by one of the worst pandemics, the country was preparing to choose a new head of state. For many civil society organisations, it was time for real change.

About 30 organisations joined forces under the banner of "Acting Against Inequality" to campaign to encourage the presidential candidates to make the issue of inequality a priority in their programmes, debates and public speeches. In the country, on average, a boy living in an urban area is 19 times more likely to finish school than a girl living in a rural area. It was important to ensure that the president-elect would make the fight against inequality one of his priorities.

This was no easy task. The coalition "Acting Against Inequality" did not want to simply collect campaign promises from the presidential candidates, but rather get a formal commitment from them to reduce inequalities. In order to accomplish this, they drafted a manifesto with recommendations on how to tackle inequalities in the areas of education, health, taxation, climate change, gender policy, and many others. This resource was then presented to the 10 candidates, who all agreed on the principle.

Since an action is worth a thousand words, the coalition invited all candidates to come and sign the manifesto in front of journalists and other members of civil society. These few pen strokes would be proof of their commitment to combat inequalities and improve the lives of the people of Burkina Faso. Nine out of 10 candidates came.

Now that the potential future presidents were committed, it was time to reach out to the people of Burkina Faso and get them to vote for the candidate with the best program in the fight against inequality.

After analyzing the social programs of nine candidates, the coalition "Agir contre les inégalités" shared its assessment with the general public via social media, using a point system and emoticons to make it easier to understand. 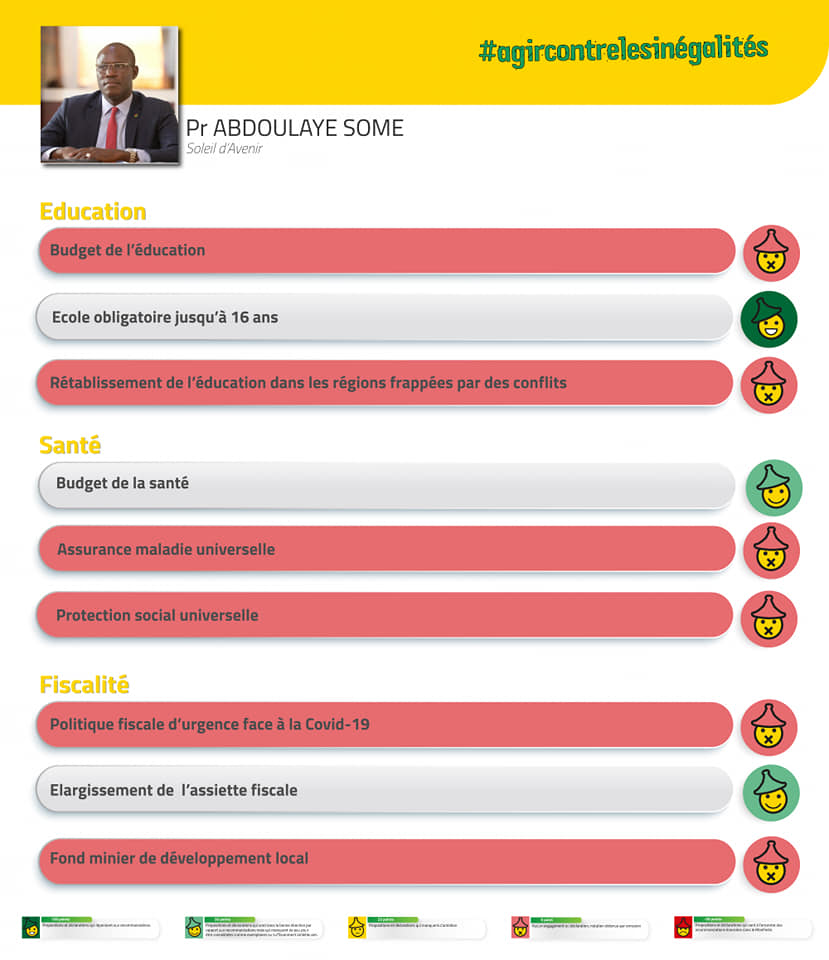 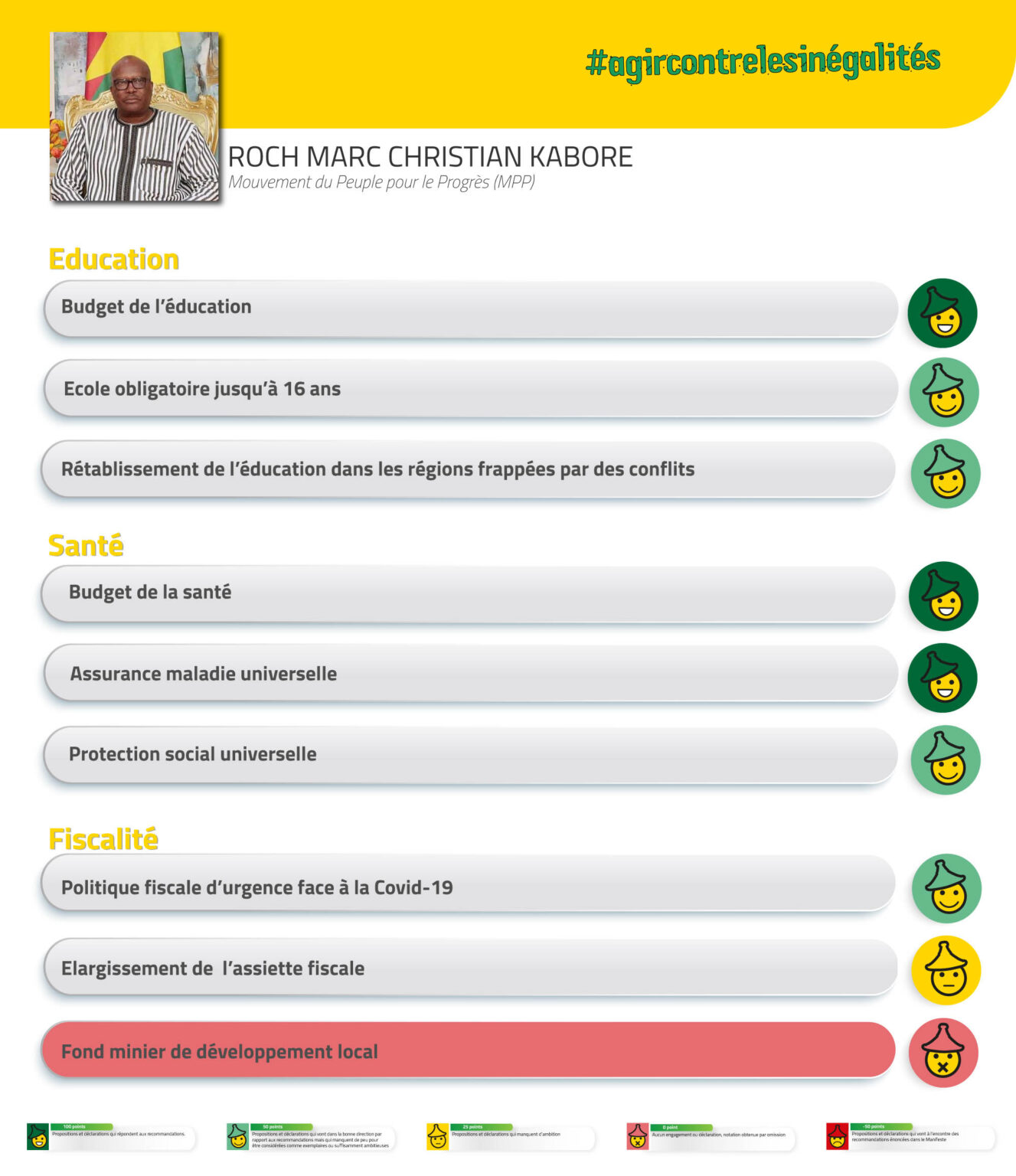 To " not leave anyone by the wayside " as the campaign tagline states, the coalition then organized meetings, caravans, conferences in Ouagadougou and outside the capital, to reach women, youth, journalists, etc. "We called on the population to vote for the candidate who would take into account inequalities. We should not give our vote in exchange for a bag of rice, in a month that bag will be gone. You have to vote for someone who takes into account the realities of the country," explains Issaka Ouedraogo of Oxfam Burkina Faso, who was in charge of the volunteers during this campaign.

The success of this ambitious campaign was soon noticeable: two million people were reached online and offline and called for a fairer Burkina, the Burkina Faso they deserve.

Less than a year has passed since the presidential election and these CSOs continue to work relentlessly. With this first request from President Roch Kaboré, the coalition will have a real say in decisions made about job creation for young people and women. This is a first victory, but they know that there is still a long way to go. Fortunately, they are more motivated than ever. "We have set up a follow-up mechanism to permanently appeal to the government to ensure that it is still working to reduce inequalities at all levels," comments Alassane Bougma.

In Burkina Faso, Oxfam and its partners will continue to fight against inequalities to ensure better living conditions for all the citizens of the country. 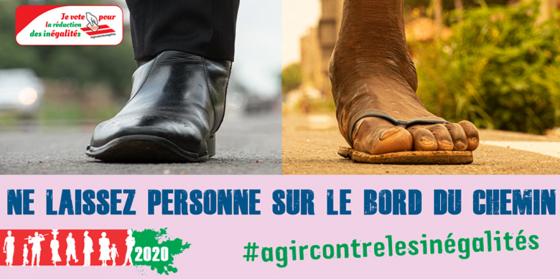 The fight against inequalities is a priority in view of the presidential elections in Burkina Faso (November 22) and Niger (December 27), thanks to the mobilization of civil society.