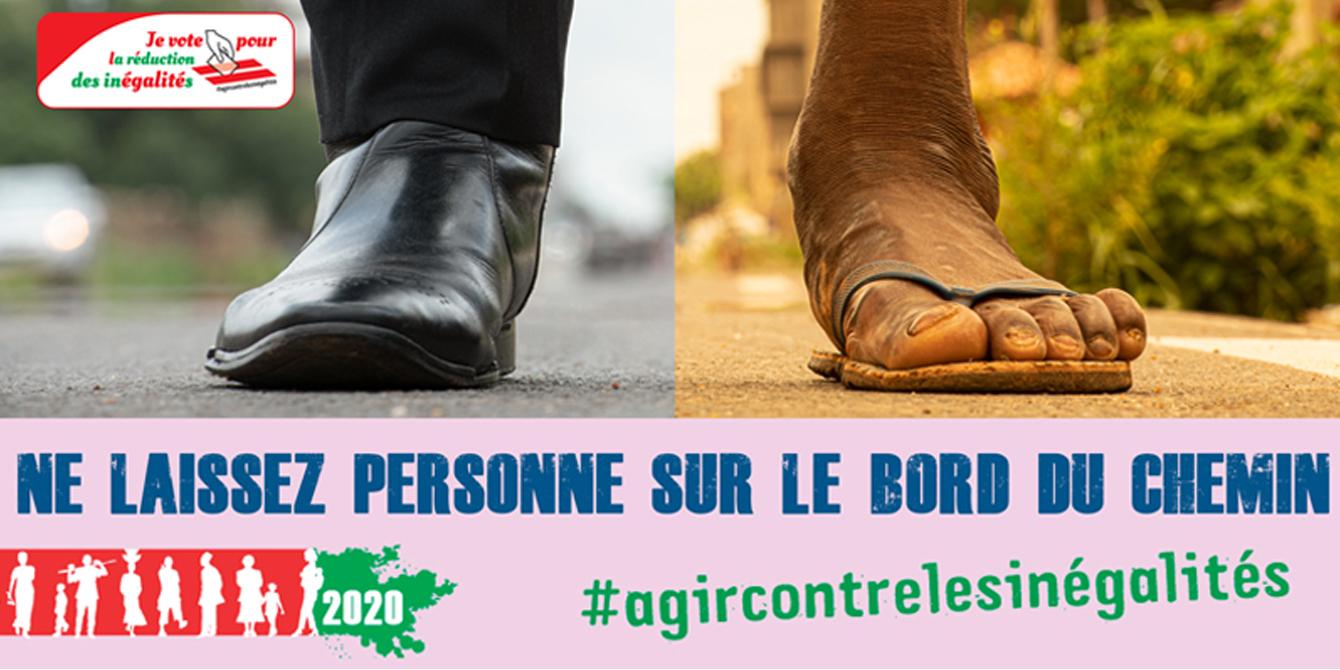 "Leave no one by the wayside" is the theme of the campaign against inequality in Burkina Faso.

The fight against inequalities has become a priority in the presidential elections in Burkina Faso (November 22) and Niger (December 27), thanks to the mobilization of civil society. Local organizations are lobbying candidates to publicly commit to a series of recommendations to reduce inequalities. And it works. In Burkina Faso, nine out of ten candidates have formally committed themselves to fighting inequality.

In both countries, they recommends a massive increase in the budgets dedicated to health and education, greater support for the agricultural sector hard hit by the Covid-19 crisis, a system of progressive taxation, reforms of the civil code to put an end to inheritance discrimination against women.

Burkina Faso is the country with the highest education budget among WAEMU countries, with 22.9% even exceeding the global target (20%). But the amount mobilized remains too low to enable all children to attend school. For the candidate Monique Yeli Kam of the Movement for the Renaissance of Burkina Faso, it is clear that "it is through education that Burkina Faso will succeed in meeting the challenge of its development and reduce inequalities. »

On the voters' side, people speak out and social networks are overheating, creating a ripple effect in favor of more equality. For Madjara Traoré, president of the Provincial Union of Agricultural Professionals of Kénédougou in Burkina Faso, the message is clear: "Those who will run in 2020, they just have to do everything to take rural women into account. We are on your plates in the morning, at noon and in the evening. If we don't produce, you don't eat". Women and young people, especially in rural areas, are indeed the main ones left behind. In Burkina Faso, the budget for the agricultural sector, which is the source of life for more than 80% of the population, fell by 38% between 2017 and 2019. And only 7% of women own land compared to 32% of men.

The stakes are high for these countries, but also for the Sahel region. The socio-economic inequalities and the deep sense of injustice experienced by the Sahelian populations are at the root of the many crises the Sahel region is experiencing, according to Oxfam's report on inequalities in the Sahel. Mali's neighbor has fallen into political crisis in recent months, culminating in a coup d'état in August 2020. Faced with a deeply broken social contract between populations and leaders, the message is clear for social movements and civil society organizations in both countries: it is urgent to radically change course and to prioritize social justice in order to put an end to the Sahelian crises.

"Leave no one by the wayside" is the theme of this campaign in Burkina Faso, where the wealthiest 20% still concentrate 44% of income, while 80% of the population shares the remaining 56%. More than thirty civil society organizations have been mobilized since the beginning of the presidential campaign under the banner Acting against Inequality. Candidates were invited to sign a manifesto containing recommendations at public meetings that voters could follow on Facebook and Twitter. The evaluation of their commitments to ensure that they move from words to action is also a public event.

As the campaign in Burkina Faso draws to a close, the movement against inequality spreads to Niger, where the "Vote for an Inequality-Free Niger" campaign begins, spearheaded by the Alliance Against Inequality, a coalition of some 15 women's and youth rights organizations, faith-based organizations, trade unions, social movements and other national and international civil society organizations.

The Alliance Against Inequality proposes a new social contract prioritizing the reduction of inequalities in this country which, thanks to good economic growth, has just left its long occupied place as the poorest country in West Africa, moving from 173rd place in 2012 to 132nd place in 2020 in the World Bank's Doing Business ranking.  But Niger also has the lowest level of education in the world, with an average schooling duration of just 18 months, so much remains to be done in the fight against inequality.

In Niger, there are over 2.9 million people who have fallen into emergency situations during the year due to hunger, flooding, and violence by armed groups. Malnutrition persists and causes much greater stunting in rural areas than in urban areas (47% vs. 29%) among children under the age of five. "I find it difficult to breastfeed my four-month-old baby, I don't have enough milk because you have to eat enough to get the strength and nutrients you need, and we don't have enough food," explains Maimouna Hama, a displaced woman who has taken refuge in Ouallam.

Certainly, a better tomorrow is possible in the Central Sahel if one believes the US$1.7 billion pledges made by 24 donors at the Ministerial Round Table on the Humanitarian Situation in the Central Sahel Region held in Copenhagen on October 16, 2020. But West Africa remains the region where governments are the least committed on the continent to tackling inequality, according to Oxfam's Inequality Reduction Commitment 2019 Index (ERI). The real wind of change for more equality will have to come from within. And on the eve of elections in Burkina Faso and Niger, voters are hungry.

Sahel: fighting inequality to respond to development and security challenges

To respond to the growing crises, it is urgent that the Sahelian states and the international community commit themselves to making the fight against inequalities a priority.